These are the award winning sessions used by: 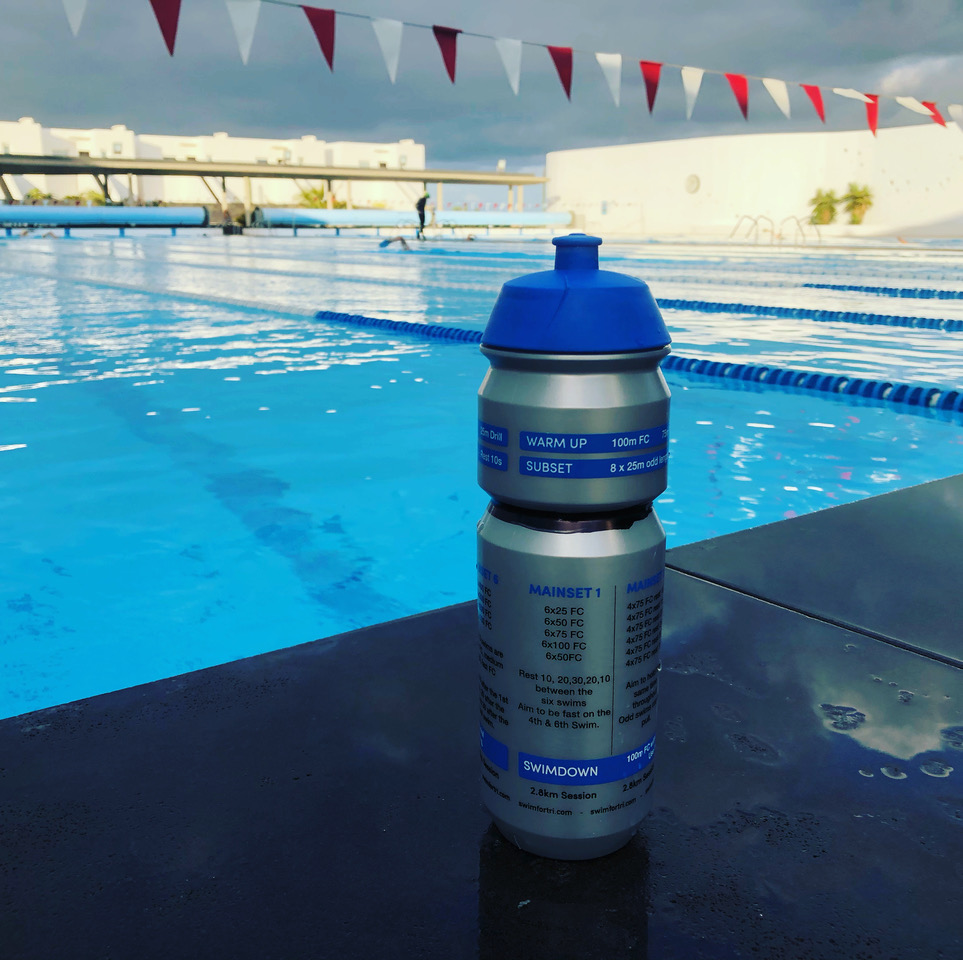 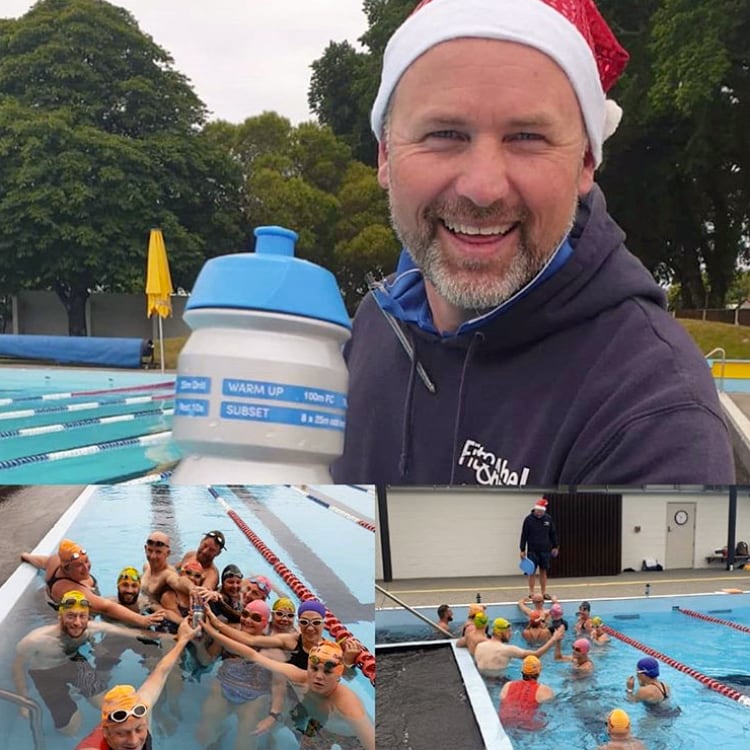 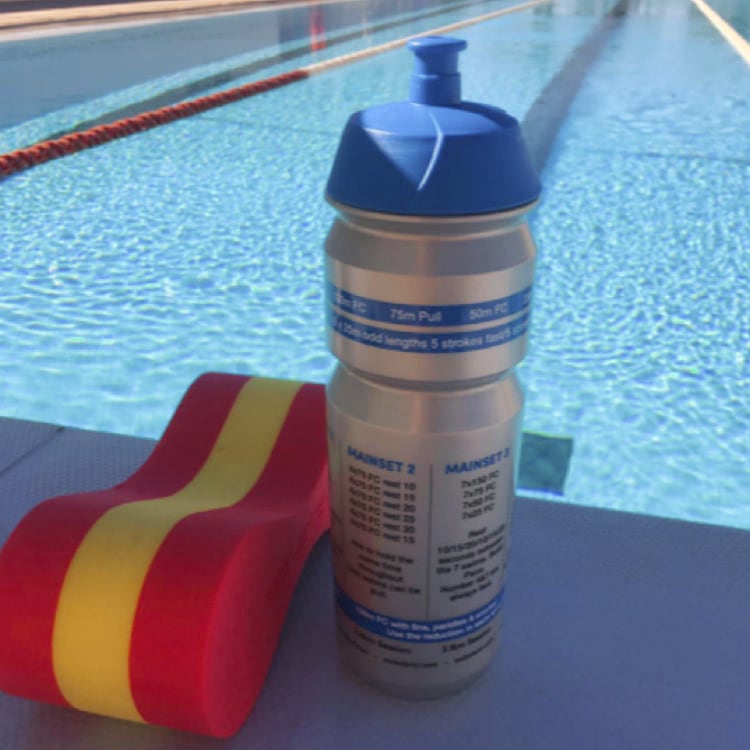 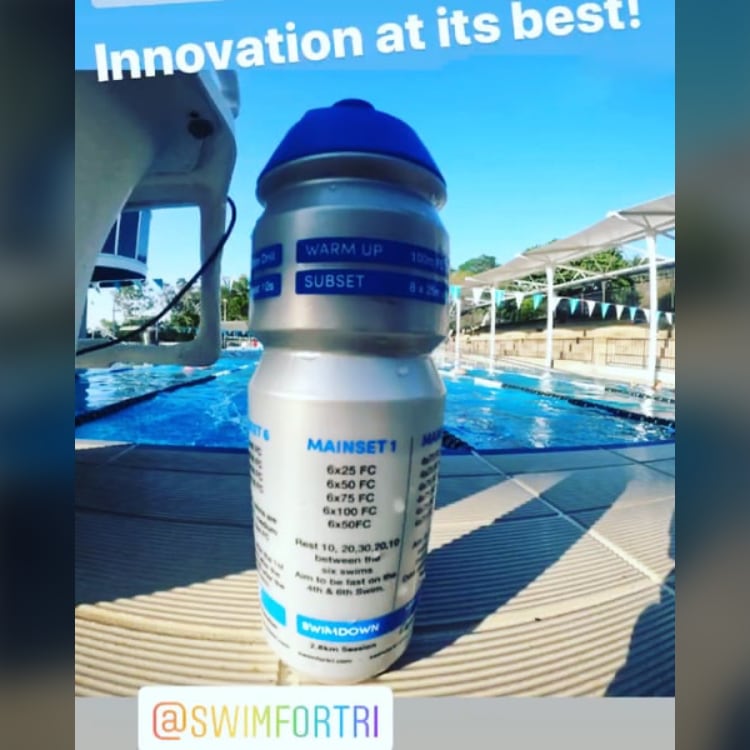 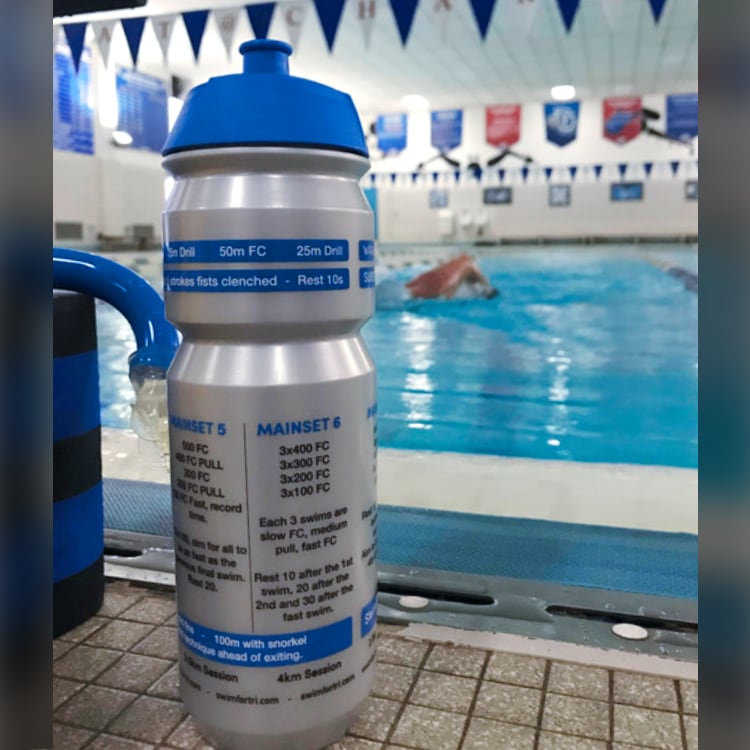 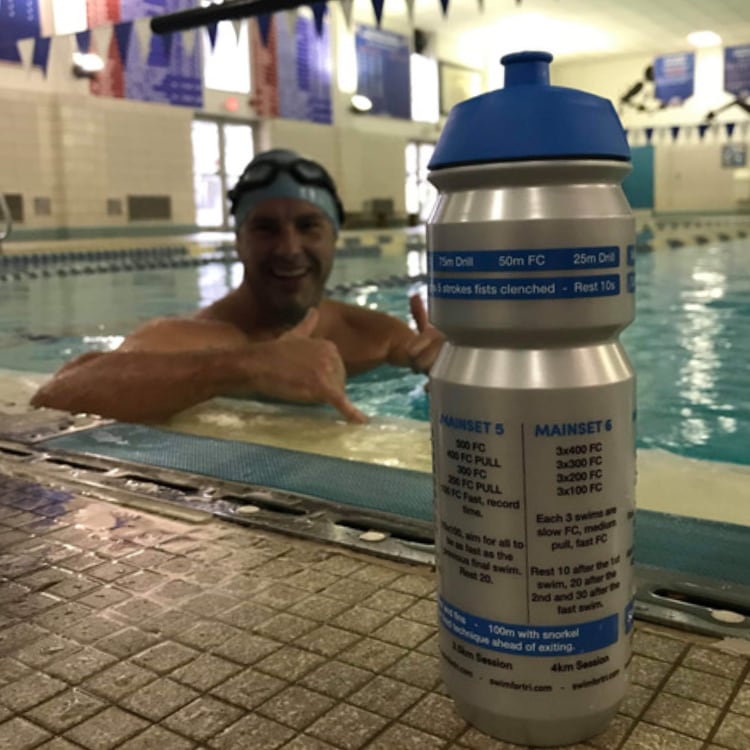 Session in a Bottle

By Swim for Tri

To keep the sessions a reasonable size on a limited space, keep them challenging yet interesting was key with #sessioninabottle.
Unfortunately there has to be a bit of swim jargon to help keep it condensed and I hope this helps you follow the sessions.
Here we break down a session and explain what some of the numbers and expressions mean.

The following glossary will try to offer an insight into how to read, understand and put into practice a more productive swim session. It will allow you to read and understand the sessions and get the best from them.

Please contact us with other enquiries for bulk orders.
Club rates can apply.

WARMUPOften starts on dry land prior to getting in the pool. Literally warming up the body ahead of intense activity. Usually it is an easy swim, predominantly FC or Backstroke with some drills thrown in. Swim aids such as paddles are avoided due to the increased resistance. Fly arms and Breaststroke kick are also not usually used in the early parts of a warm-up due to the higher intensities they command.

SUBSETUsually swum as an extension of the warm-up to build HR levels so that when the necessary speeds and HRs of the main set are asked for they can be delivered immediately. Often we see main sets getting better as they progress due to the athletes becoming fully warm and able to swim at the speeds we would like to see.

MAIN SETThe part of the session that is the focus or aim of the swim training plan. Swim exercises will be performed in many ways to promote, speed, endurance and/or technique. There are many training methods used to promote and develop aspects of your race depending on the season/training phase. This is the main focus of this article.

Interval SessionsWhen attempting a session, there are several ways the efforts can be increased to help elevate your HR. Four key areas are adjustable to make the session more intense, more productive and meaningful. The distance of the repeats you swim – week 1 we attempt 4x200metres, building to week 4 where we attempt 4x 300 metres

The interval of the swim, i.e. you get 2mins to swim 100metres FC on week 1 before attempting another repeat. As your fitness improves you will get more rest as you swim each 100m faster. After several weeks the interval might come down to 1:50.

The number of repeats swum may also be increased adding to the intensity of the session. Week 1 you may only make 5x100metres FC on your interval before reaching exhaustion. The following week we might aim for 8x100s on the same interval. The aim time is the final variable that can be manipulated. Your coach might advise 8x100metres FC with an interval of 2mins but a target of 1:45 meaning you get 15secs rest before starting again. After 4 repeats at this pace the effort might be too much and you slip to 1:50s. These are the benchmark times and efforts you should bear in mind and record in a training diary. If you know your PR (personal records) you will know if you are improving.

With a few weeks training hopefully you would improve and can try the 8x 100s metres FC with an interval of 2mins and an aim time of 1:45 again. If you make the set your coach might increase the number of repeats to 12 or bring the interval down to 1:50 and encourage you onto a target of 1:40. The possibilities are endless.

Interval training can cover many areas helping you work on key areas of your race and helping to make training race specific.

Speed SessionsTraining at higher speeds is often practiced with very short repeats (12.5 – 25metres) lots of rest and differs from max effort training. Swimmers will often try to swim faster than max speed with the use of long stretch cords pulling them through the water faster than normal. This involves a lot of pool space and being realistic we might have to settle with fins. Swimming short bursts with fins will also have a similar effect of generating ‘overspeed.’ For the more serious Triathlete this type of set would be useful for helping you drop an annoying drafter or helping you jump back onto a pack a few metres in front.

Negative and Even Split SwimsA main set of 400metres might be swum in a negative split fashion. To work on ‘back end’ endurance i.e. help your ability to finish a race strongly your coach might ask you to negative split each 400. This could be done time based where you are needed to swim the first 200 at a certain time and then bring the second 200 home 10secs quicker or some other desired number. Alternatively the effort levels cold be targeted so that the first 200metres of the swim is performed at 60% effort and then the second 200metres at 80% effort. Even Split swims are similar in that you are simply aiming to offset the fatiguing effect by swimming the second half of a swim at the same pace as the first half. HRs invariably will go up and a 400metre swim with a target of 5mins would attempt to be swum in two 2:30 sections.

This way of learning pacing will carry over to race day swim pacing most effectively. By helping not start too quickly you should get onto your bike a lot fresher.

Build SwimsA build swim would involve a gradual pace and effort increase throughout the duration of the assigned distance. You could either do this time based or with effort levels. I.e.

6x 300metres build FC. The first 100 of the 300 should be at 60%, the second at 70% and the 3rd at 80%. Your coach could also specify a time based build swim, i.e. you should improve by approx 5secs per 100 for the duration of the 300. Despite differing effort levels between 100s the 300metres is swum continuously. The rest period will be taken between 300s. After the first 100 you will continue straight onto the remainder of the swim. If there is a large wall mounted clock to the side of your lanes you might be able to check your split times or hopefully your coach will take them.

A change of pace in the pool is something that I have noticed many Triathletes struggle with. For the more competitive Age Grouper this is an essential element of the swim.

Reducing Sets (also known as descending)A reducing set would mean that repeat after repeat gets quicker than the previous. Targets could be assigned as either time based or effort based. For instance:

Broken SwimsBroken swims form an interesting challenge. In an effort to swim faster then your race pace you could be set a broken swim where you attempt to break your best time for a distance. This is made possible by breaking it into smaller sections with additional rest. Not be confused with a rest interval, with a broken swim you would take your own short rest period at the set distance. I.e. in a 25metre length pool you might be set:

3 x 200m broken with 5secs at each 50m at a Sprint distance race pace. If your best time for a pool based 400m was 6mins then your aim would be to beat this by swimming each 50m at about 45secs. Between each 50m you would take your own 5-10secs rest making this slightly easier. If a swimmer were having a good day and making this challenge easily then the swim could be broken at the 100metre point after 4 lengths. 8x25m with 5 secs would probably make for a very fast swim with the most rest.

I like to see our swimmers perform these sets about 2 weeks out from major competitions to help fine tune ‘race speed.’ The sets would usually be longer then the example given and worked out for best 1500m or Ironman distances.

Test SetA necessary part of recording and checking your progress is to test your self on a regular basis with a benchmark set. At an elite level parameters would be kept identical down to the smallest detail. Ideally but rarely practical perform the test at the same time of day, same pool, similar warm-up before the set etc. The test sets can take many forms but a common set swum is the 7x200metre step test.

HR, stroke count, split times should all be checked and noted. Aim to swim the 200s even split.

The first 200metres is swum at 60 BPM below max HR and you descend the set to the last 200metres being swum at max HR. From the results you can record max HR, best time for the 200, swim velocity (average for 100m in secs,) stroke rate (strokes per minute) and stroke count (strokes per 25m/50m)

This common test set is fairly scientific and at a novice to intermediate Age Group level some of the simpler methods can be incorporated. These might include the already mentioned ‘as many lengths in 20/30mins TIMED SWIM’ or previously written about SWIMGOLF where we add stroke count to time over 25m and combine the two for a score. Attempting to lower the score with inefficient speed will keep the score high. Attempting too much distance per stroke will lead to a slow time and not an optimum speed keeping the score high. Critical Swim Speed is a useful statistic to know based around a timed 400m and 50m swim. As this improves you can be sure your aerobic capacity is improving among the many things it measures.

To complete a session once the Main set is finished the all important swim down is needed to avoid carrying tiredness over into your next session.

SWIM DOWN Will aid recovery from a tough training session or race. Also known as the cool down period, it is a sustained easy swim of at least 3mins. This is the time it takes for the heart to realise it is not needed for such hard work. It will also help remove the acid build up in the body, bring your Pulse back down and reduce the dilation of blood vessels. HR levels will decrease back to normal levels and rates or Breathing will return to normal. A training session would always finish with a 200-400m cool down, perhaps longer depending on the intensity levels in the session.

The SFT swimdown has been carefully created to do all this and salvage a tired technique post mainset.